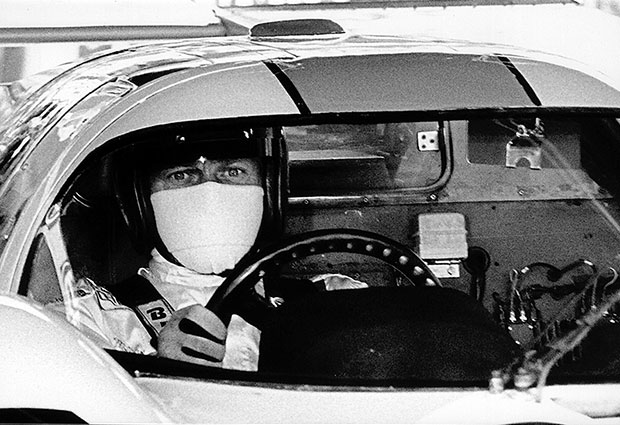 Even 40 years after its premiere in June of 1971, Steve McQueen’s epic Le Mans is still the greatest racecar film of all-time.   Just the starting scene, the tortuous waiting for the race to begin at 4pm with an explosion of roaring engines, chaos and smoking tires, is a masterpiece in and of itself.  Whoever doesn’t get goose bumps watching the three-Gulf colored Porsche 917s accelerate a bit sideways out of the start probably is someone likes watching soap operas while sipping on an alcohol-free beer.

Pedal to metal shooting at 380 km/h

Maybe Le Mans is so good because Steve McQueen – the King of Cool – was so good.  “He looked more like a race driver than any race driver“ was the what many people said about his performance. McQueen, himself a car and motorcycle racer, didn’t give a damn about critic reviews and public opinion about the film on the legendary 24 hour race  – the main thing for McQueen was a nod from the men whose opinion mattered most, the ones who wore fire-proof race suits themselves and for them to say:  ”That’s it.“

McQueen’s obsession with perfection went so far that when the 917 passes the Ferrari 512 in the decisive scene, he demanded on filming it at top speed – around 380 km/h on the Hunaudières straight-away. “At a bit fewer km/h it would have been a lot easier, but Steve insisted on the full speed.” said former Porsche racecar driver, Herbert Linge, who occasionally played Steve’s double in the film.

The film company Solar Productions had a ton of work to do in the summer of 1970 and carted hundreds of extras to Le Mans in order to make the race look as realistic as possible.  Steve McQueen focused on every detail, including his selection of a race suit, which he  demanded be the same one Jo Siffert wore, a crème white one with blue and red racing stripes and a Gulf logo. 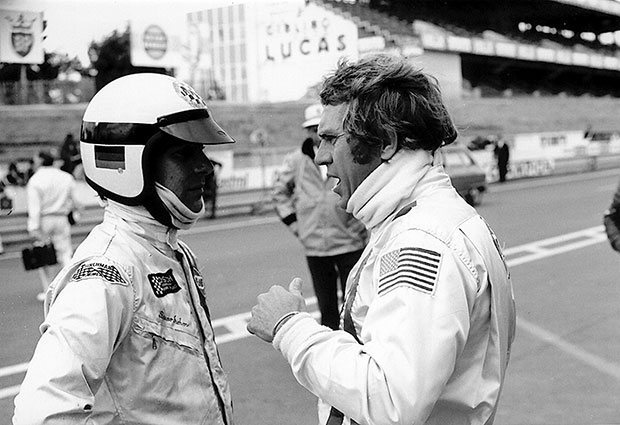 A case with 20 Heuer watches

Jo Siffert, on the other hand, rake in the cash providing cars for the film and renting them to Solar for 5,000 dollars a week (he then later sold many of them to film stars for a nice profit.)  When the clever Swiss heard that McQueen had chosen his race suit to wear in the film –which featured a large stitched-on “Chronograph Heuer“ patch – he acted immediately. Siffert called his friend Jack Heuer and discussed with Heuer the possibility of equipping as many people as possible in the film with Heuer Chronographs – and, most importantly, the leading man.

Jack Heuer didn’t need to be told twice. The watchmaker boss told Gerd-Ruediger Lang to get 20 watches over to Le Mans as quick as possible, did as he was told. Lang, who worked then at Heuer, as a timekeeper ,among other things, would later found the Chronoswiss brand in Munich. Along the way to the Le Mans set in Le Sarthe, pulled out all the stops, even giving up his last bit of cash at the Swiss border. 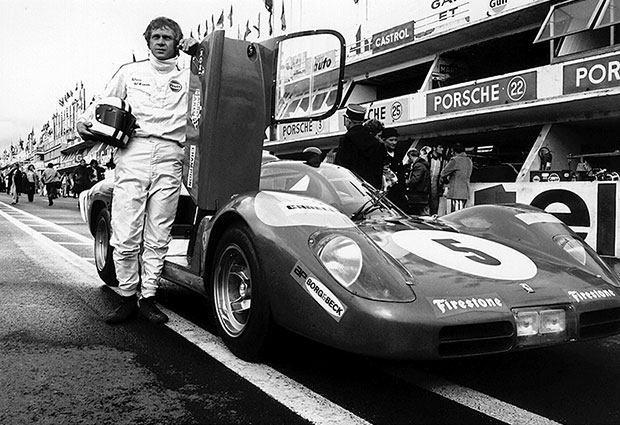 For Gulf Oil, Le Mans was a stroke of luck, as never before or ever since has a product been so visibly and positively placed in a film— all without paying for it.

After Le Mans came out, there was a run on Gulf jackets and accessories. Everyone wanted to look as cool as the King of Cool! Le Mans also gave birth to idea of the GRANDPRIX ORIGINALS brand. The founder’s original idea was to make 50 old-school racing jackets. What came after that, was similar to  the demand for Gulf jackets after the Le Mans hit theaters. In 2003, everyone wanted to all look as cool as Steve and we ordered a larger number of the jackets and an old story was reborn in a new era! Since then it has developed into the whole drive & lifestyle collection you see here today online.

GRANDPRIX ORIGINALS is the exclusive world-wide licensing partner for clothing and accessories for Gulf, which means without our approval the logo cannot be used for such purposes. By coincidence, we ran into a lawyer, who administrates the estate of the one of the official Le Mans set photographers and we bought a whole box of postcards and letters from Steve McQueen, including, among other things, the script to the film, which was somewhat thin, as there isn’t that much talking in the film!